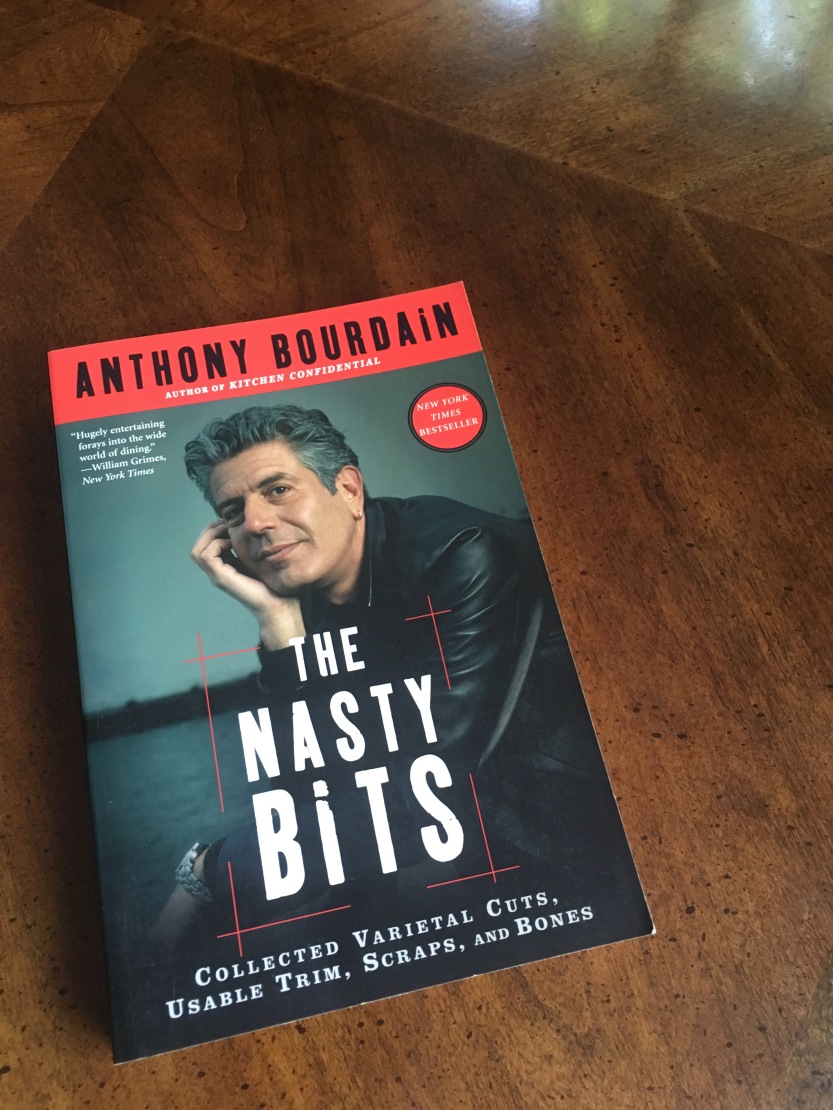 Today, Anthony Bourdain died by suicide. This same week, we lost Kate Spade to suicide, and while I know many people felt a connection to Kate Spade, whether it was for her talented designs or for her business acumen, Bourdain’s death hit me in a particular way. He was a talented chef and TV personality, but it was his writing more than anything else that had an impact on me. He had a unique writing talent evident in all of his books and in the voice-over commentaries he gave in his TV shows – a clear voice, a way of expressing what he saw and experienced that made us want to experience it for ourselves.

When I was in high school, I wanted to become a chef. I dreamed of going to the Culinary Institute of America. And then a TV show came on the air called A Cook’s Tour. I watched it religiously, and when I learned that the host had written a book, I had to read it.

A Cook’s Tour was the first of his books that I read, and I devoured it, so to speak. I’ve been a reader all my life, but the way he wrote fascinated me. I had never read descriptions so vivid and multifaceted. He could be so profane and yet so contemplative and humble. For the first time, it occurred to me that I wanted to do more than read great books, I wanted to write them, too.

After finishing A Cook’s Tour, I had to have more of his work, so I bought Kitchen Confidential. It would be no stretch for me to say that this book changed my life. He told stories of his life as a chef – written with such openness and raw honesty that I knew I could never be a part of that world. Not for the first time, and definitely not for the last, I changed my mind about what I aspired to do and be.

Years later, I moved to Austin. I found out Anthony Bourdain would be at the Paramount Theater for an evening talk and I had to be there – at the time, I had few friends in town, so I bought a single orchestra section seat, and I went by myself. It was an evening I will never forget. He spoke informally, allowing audience members to shout their questions to him, like a conversation with a few hundred people. He sat alone onstage, sipping a beer and chatting with us as though we were all old friends.

At the end of the show, I was able to say hello to him and ask him to sign one of my copies of what was at the time his newest book, The Nasty Bits. I wish I had had the presence of mind to tell him how much he meant to me, but I’m sure it would have been nothing he hadn’t heard from many other young people before.

This is a text widget, which allows you to add text or HTML to your sidebar. You can use them to display text, links, images, HTML, or a combination of these. Edit them in the Widget section of the Customizer.
%d bloggers like this: